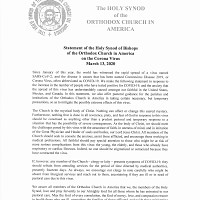 St. Paul's Letter to the Romans 14:6-9
Matthew 15:32-39
Emilian the Confessor & Bishop of Cyzikos; Our Holy Father Myronus the Wonderworker, Bishop of Crete; Holy New Martyrs Triantaphillus of Zagoras and Anastasius of Thessolonica; Gregory of Sinai and Mount Athos; Afterfeast of the Transfiguration of our Lord and Savior Jesus Christ; Anastatios the Martyr from Bulgaria
Powered by Orthodox Web Solutions
Home | Back | Print | Top

The Mission of The Orthodox Church in America, the local autocephalous Orthodox Christian Church, is to be faithful in fulfilling the commandment of Christ to “Go into all the world and make disciples of all nations, baptizing them in the name of the Father, and of the Son and of the Holy Spirit…”

St. Michael Orthodox Church is part of the Diocese of Eastern Pennsylvania, which is presided over by The Most Reverend Mark (Maymon), Archbishop of Philadelphia and Eastern Pennsylvania. Our mission is bringing the joy of Christ's resurrection to those who have never heard the Good News, and to strengthen and encourage the faithful who reside within Old Forge and the local area.

The Holy Scripture is a collection of books written over multiple centuries by those inspired by God to do so. It is the primary witness to the Orthodox Christian faith, within Holy Tradition and often described as its highest point. It was written by the prophets and apostles in human language, inspired by the Holy Spirit, and collected, edited, and canonized by the Church.

Holiness or sainthood is a gift (charisma) given by God to man, through the Holy Spirit. Man's effort to become a participant in the life of divine holiness is indispensable, but sanctification itself is the work of the Holy Trinity, especially through the sanctifying power of Jesus Christ, who was incarnate, suffered crucifixion, and rose from the dead, in order to lead us to the life of holiness, through the communion with the Holy Spirit.